I’ve been on the hunt for the perfect nude shade for ages. It seemed that, for the longest time, I would never be able to because everything that other people were falling heads over heels in love with just did not work on me.

There were the Chanel nudes that looked amazing on everyone (excluding me), and then the Dior “Grege” that Shari (Mistymom) praised about.. but no matter how many times I went back to the makeup counters to try those colors on, I always left a little disappointed. 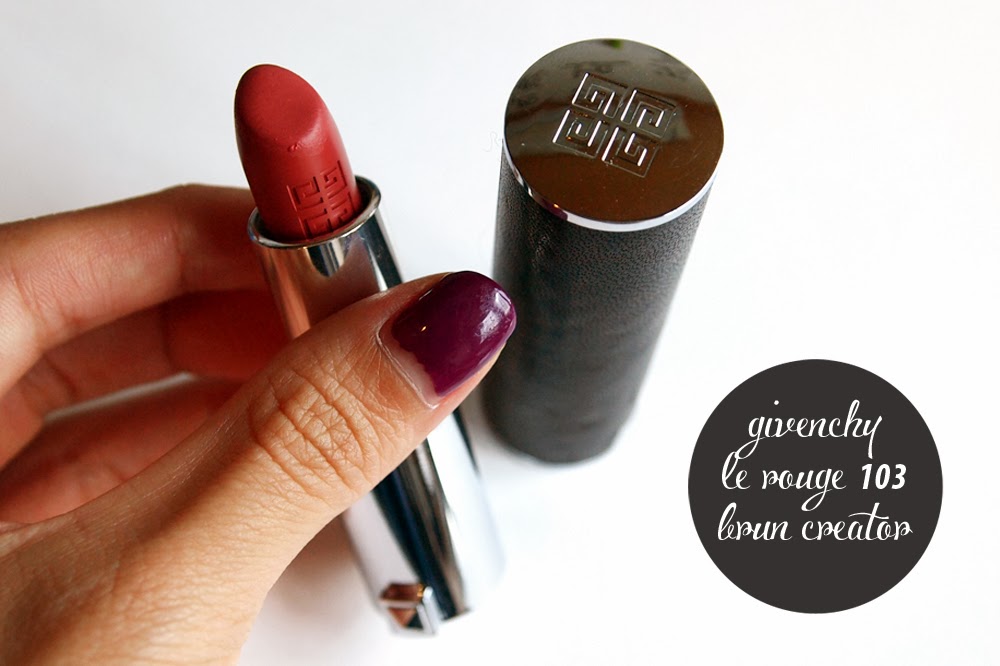 Enter the Le Rouge Givenchy. It was really quite a chance meeting because they had a little pop up area in Ion’s Sephora and Ash and I were just casually passing by. I was originally interested in another color, but the sales assistant said that this particular shade “Brun Createur” was getting quite a bit of hype as the perfect nude and that I should try it out.

Well I did! And I fell HOOK LINE and SINKER for it. That is.. I THOUGHT I did…

As timeless as Audrey Hepburn’s little black dress…Le Rouge transforms you into a style icon with its signature semi-mat finish and genuine lambskin leather case.Each shade is specially concentrated with intense color pigments for easy one-stroke application that lasts throughout the day. This lipstick defines, plumps, and moisturizes lips with its unique lightweight shaping formula and non-sticky texture.Lips are sensuously dressed in radiant semi-mat color that is soft to the touch. 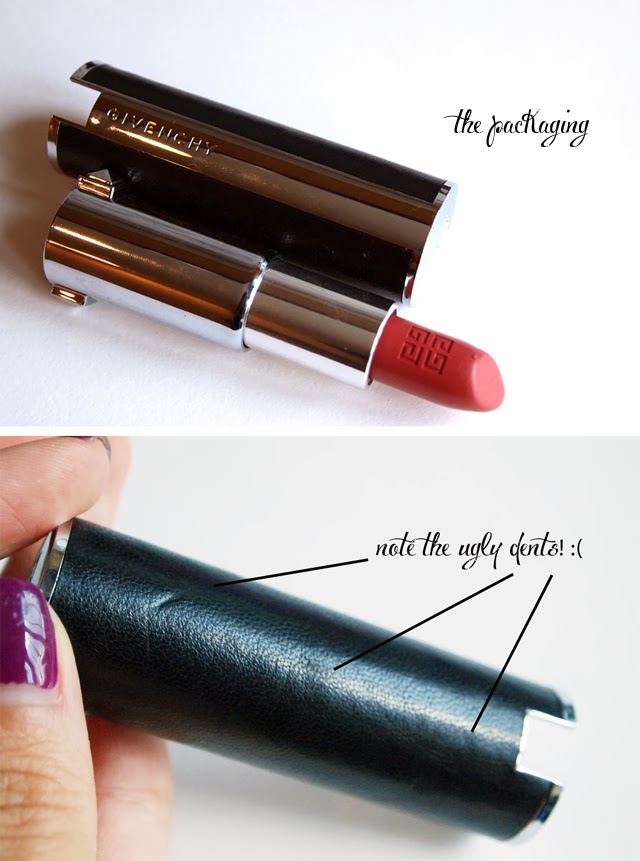 When I first opened the box and saw my brand new Givenchy lipstick lying inside, I was astounded at its beauty. It was so sleek in its casing of black pleather contrasted against the silver metal, with a beautiful Givenchy logo placed at the top and the text along the side.

The whole thing had a slight S/M feel to it.. probably because of the spikes at the side as well.. The spikes are actually connected to the lipstick tube, and is what you hold on to to pull it out. Inside, the word “Givenchy” is embossed and everything looks so luxurious.

What I did not like, however, is how the pleather started having really ugly dents and marks after bringing the lipstick out for ONE day. It looks really horrid now, as you can see above. I suppose some people won’t find this a big deal, but for the price I paid I expected a lot more.

The color is what can be described as a Dusty Mauve.

I know I know, I described it as a perfect nude even though its not skin-colored nude… but this would be due to the fact that everyone’s base lip color is different so what is considered nude on some is not applicable to others! My base is more of a pale pink, but I do have friends whose lips lean toward a brownish color instead. Anyway, this is the closest I’ve ever gotten to “My lips but better” so I’m satisfied! 🙂 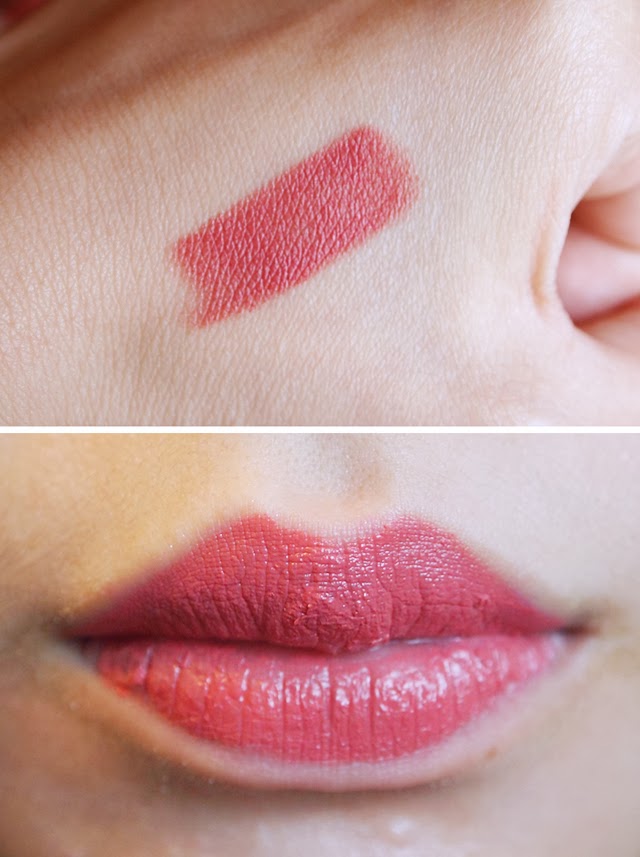 Texture-wise.. I’ll be comparing to the above “About” description where its said to “define”, “plump” and “moisturize…

“Define”-wise.. I would say there’s not much there. I do find that it doesn’t go on too smoothly if you have dry lips and can look a little cakey (which is weird because that’s how you’d describe foundations). I also do not think that my lips look very well-shaped after usage.

It doesn’t really “plump” either because I have thick lips and I did not find it did anything to them… I’ve seen lipsticks that made me look bee-stung (even without promising to), so you might be disappointed in this department.

Lastly, nope it does not moisturize at all. I found the color to feather off quicker if you have dry lips and everything looks so wrinkly.. if you want to use this lipstick, make sure you’ve used a good lip balm below or have exfoliated and hydrated your lips well.

A little disappointing that the color is so beautiful, but just kind of under-delivers.

This is where it gets weird folks.

I cannot describe the smell and taste too well in terms of undertones and overtones.. but it smells/tastes like really cheap lipstick. The kind you paid $2 for when you were too broke in High School.

In fact, putting it on kind of nauseates me sometimes.. and though the color compensates for it.. the texture just makes me reconsider throwing it aside all over again.

If you get the chance, really, go smell this lipstick; I do not know how to describe it otherwise. It MAY just be this color, I’m not sure. I know Ashley and I both smelt/tasted(?) it and were both pretty “bleurgh” about it.

The application is very straightforward. I don’t think there’s a special way to put it on.. I suppose a lip brush might be in order for a more precise shape though.

It’s pretty much your typical lipstick.. I don’t think that the lasting power was anything fantastical. It lasted me about 2-3 hours, feathered out, and became this dry-looking mess I HAD TO wipe off my lips before reapplying (I do have slight OCD though, and am very very particular about how my makeup looks). 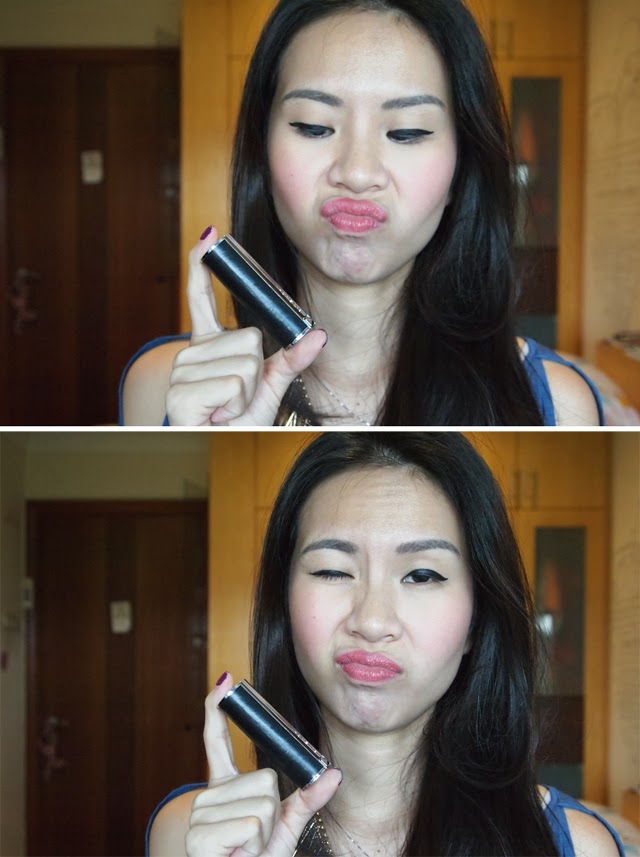 This lipstick has serious cons for me. I know some people who love this particular lipstick, but maybe its just not for me. I’m probably better off investing that money into something else. If not for the fact that I used a Sephora gift card for this purchase, I might actually be a little angry.

For those wondering why I did not try it on before purchasing it… Well, I did try it on, but I was too obsessed with the beautiful color to have noticed much else… And I do have that sin of constantly smacking my lips together whenever something is applied onto them.. so it may just be me, hey?

Read More
BBeauty
Hello everyone!! Happy weekend to all of you! 🙂 Recently, we’ve run into quite a few people who’ve…
BBeauty
Related