0
Shares
0
0
0
0
At this point, I’ve gone back to IDS a few times to address my concerns. I’ve already gone for my first consultation and done electrocautery for my chin, so the next step for me was to do a facial. 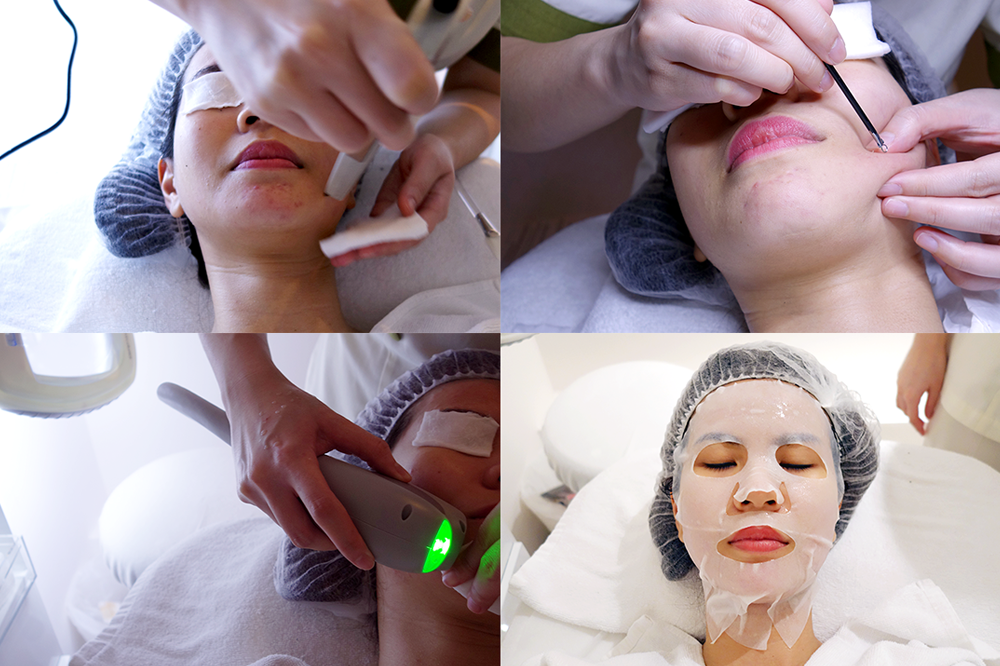 In my current state where hormones decided to flare up and punish me, my whole face erupted in small dots. Do note – for someone who’s always had about 80% problem-free skin (when I did have issues, they would always be contained in a certain area only), having it all over is definite and sudden torture. And thus, as my skin condition was, I was advised to do the Advanced Acne Treatment Plus facial!

My Issues – ‘Before’ Photos
First up though, let me show you what my skin looks like now. Forgive the very yellow lighting – I took this back when I still used my Olympus EP1 (which SUCKS!) and this was the only lighting my skin’s issues showed up properly on… The photos after this are used with my new Sony, so the quality is better and the lighting is corrected! 😀
I digress! Anywaaaaaaaaayyyy, my skin looks horrible right, I know… *very sad face*

So yes, I’m dealing with whiteheads across my cheeks, chin, and forehead. I am also dealing with redness. It’s all a very ugly picture, and yes I might be pretty brave to post it up here all unedited and what not, but the truth is that it kills me inside. Like I mentioned in my IDS #1 post, the products seemed to take a bit of time to work on me (this is normal apparently as everyone’s skin works differently) so I thought I’d speed it up with some treatments!

I thought, okay I could either talk all day with words.. or I could just show you pictures. And I decided to go with the latter. So here it is, a 4-Step Facial explained step by step below.

You’ll see my very awesome and friendly facial therapist, Jojo (ah! I love that name because it’s the same of my baby niece’s hehe) in some photos below. She’s so sweet, she made the whole experience that much better!

The treatment actually starts with Jojo removing impurities from my face. This means, even before the Ultrasound Cleansing, she removed my makeup and then double cleansed my skin with IDS’ cleansers. She then proceeded to put a comedone-softening solution all over my face so that their removal would be much easier and less painful after.

So… extractions yes. They aren’t pleasant experiences are they? Personally, I wish there would be a machine to AUTOMATICALLY suck out ALL our whiteheads/blackheads without any pain and without any further manual extraction at all but I suppose that’s wishful dreaming for now… Anyway!

As you can see above.. that’s a cotton pad full of whiteheads extracted from my face… There were actually 2 FILLED pads but it was a little difficult for me to hold both to take a shot. Pretty nasty to think that was all in my face huh! 🙁 Thank goodness Jojo spoke to me through the whole thing to distract me from the pain, which really worked! She said it was good my skin wasn’t so dry so extraction was easier and thus wouldn’t leave my face as red.

Since now you know what it looks like.. let me tell you what it felt like. Despite the suction and slight burning smell, possibly due to the strong light, there was ZERO pain. Really. At most, I would say it felt like.. when you’re a child and you go to relatives house over Chinese New Year and they won’t stop pinching your cheeks.. yeah it was pretty similar to that. More pressure than pain. My eyes were also covered so I didn’t see much of the bright light.

Jojo very thoughtfully turned on another light on my side so even when the flash went off, it would be counter acted and I wouldn’t find it so bright! :’)

Last step was to put a Cooling Anti Acne Mask over for about 10-15 minutes so the redness would subside and the solution would further zap away the acne hooray! 🙂 It smelt extremely minty but very cooling. I loved it! I normally dislike staying in rooms with a mask on doing nothing, but the whole sensation was very comfortable so I didn’t mind one bit.

However, I must say my face was still littered with red marks all over the place despite the mask (the photos above are actually from the next morning). So be prepared for that! Do this treatment preferably close to a weekend. Maybe do it on a Thursday night then recuperate over Friday-Sunday (take one day leave if you must) because the redness will take awhile to subside and it’s best to not wear makeup over at all.

Unfortunately, I had a date with my boyfriend the next night so I still put on some of my Murad Acne Treatment Concealer over my red dots.. that made me feel a bit bad. But when I removed it the night itself nothing seemed to have gotten worse thankfully. Still the best to go without anything besides IDS’s Sunblock though.

My skin cleared up pretty well but as you can see above, my hormones hate me So this means that I got 2 whoppers of cystic acne appearing on my chin. What are the odds!? Whilst they weren’t necessarily painful (more sore..) they definitely weren’t pleasing to look at. Plus I still had some redness on my face (about 4 dots on my forehead, 2 on my left cheek) so Dr. Heng said he would do a Laser for Acne on my whole face then proceed with Electrocautery for my chin acne.

Once again, it might be a little long to describe everything in detail, so I shall list them step by step below.

1) First they cleansed my face – CHECK OUT THE REDNESS. Urgh! I have horrid skin during my favorite time of the year! Sucky feelings x 100. There was no numbing cream applied after.

here is a video of it in action

2) They covered my eyes with those tiny goggles and started working around with the laser. This laser for acne has NO downtime (meaning you won’t look red the next day), NO pain and helps reduce signs of inflammation and redness. Whilst Dr. Heng quickly ran the laser through my face – focusing on some areas – the therapist beside him held a fan(?)/wind(?) device of some sort that blew really cool air out so it countered any slight burn smells from the laser! It also cooled down the skin quickly, which is what I believe led to the “NO downtime” effect and was why I didn’t need numbing cream.

3) For Electrocautery this time, I didn’t get any numbing cream either – I just moved from the laser room to the EC room. YIKES! I was scared. But ironically, it turned out that this time hurt 70% less than previously. Probably because I only had 2 pimples versus the constellation I had last time… *vomits thinking about it*. As you can see, the moment he shot the laser into the LARGEST pimple, that whole pile of nasty pus emerged RIGHT out. Kudos to Chester for even coming near enough to take this vile shot hahaha. Thereafter, I had some steroid injections and I was done!

4) I went to Real Foods for dinner LOL. Okay this part wasn’t necessary. But it proves that it’s totally fine to go out after and not feel weird about your face!

As you can see, forehead is significantly less red and filled with dots – and my cheeks and chin no longer look infested with whiteheads! 🙂 There was a HUGE cystic acne at the side of my jaw but it’s also been flattened and removed 🙂

Ah, how nice to head out without too much makeup on now! 😀 In this photo, I’ve got IDS’ ever famous Non-Tinted Sunscreen on, some undereye concealer, some lipstick and a dash of blush! In case you’re wondering, my eyebrows/eyeliner/lips are embroidered and my eyelashes are extensions, lol! In all seriousness though, you can put on as much makeup as you want, but we all know nice skin is the real foundation – so taking care is a must!

Psst – I also attribute a fair bit of improvement to Doxycycline which I’ve been taking, read more below.


On Medication
When I first went for my facial, I was put on a month’s worth of 100mg of Doxycycline (antibiotics) /day  for my acne situation. I reckon you can’t just walk in and decide you want to take it.. it actually took 3-4 reviews before Dr. Heng prescribed this to me. And whilst it does work on a majority of people, I’ve also read online that the effects stop soon after you cease taking the medicine, that you can get much worse first before getting better, and that you can’t take dairy 2 hours before and after eating the pill.Since I wasn’t informed on the last one about dairy, I’ll just tell you what I read online. APPARENTLY (huge operative word here), the calcium in milk breaks down the effectiveness of Doxycycline.. how true is that I don’t know. Also Doxycyline, being an antibiotic, isn’t great for the long run for your stomach – so whilst on it I suggest taking more probiotics, either in powder form or Yakult! 🙂 These are all information I read online, from many people who gave their reviews. I cannot stand behind it 100% but I’m sure there is at least 10% truth in it. The results are really to each their own, so I can’t promise yours will be like theirs or mine, which I admit has been significantly better.
Prices

Do note that the discounts given are at the doctor’s discretion as it will be decided only upon consultation. If the problem that requires EC or injections isn’t big or only covers a small area, the doctor might decide to lessen the cost. 🙂 Not everyone will necessarily pay the same or get the same discount.

My next visit will be in January, so I will update thereafter! 🙂 Thanks for keeping up with my IDS journey so far!