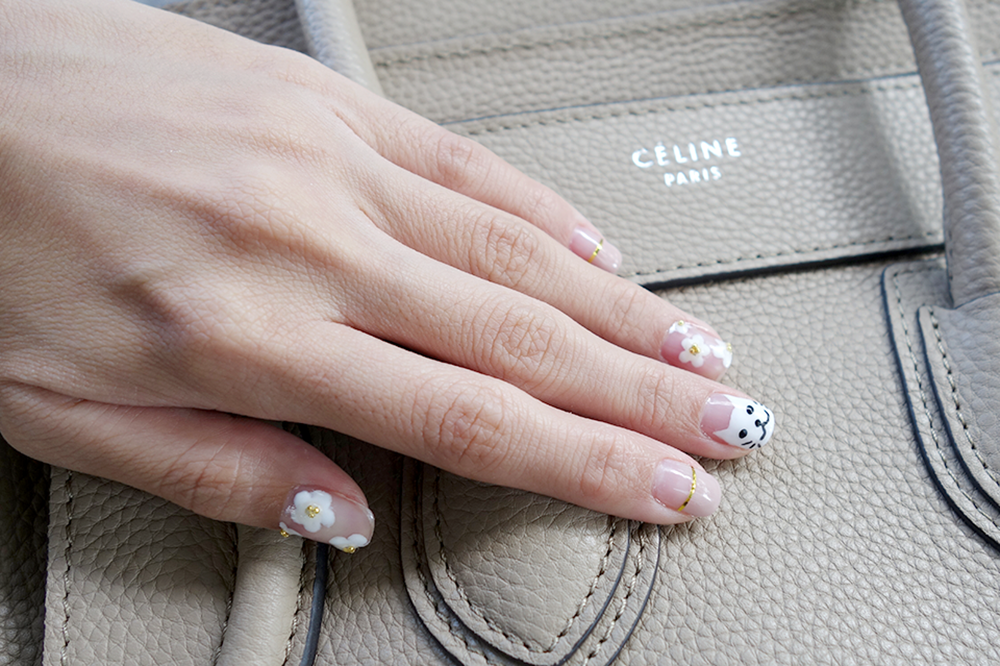 I too, believe in that – but most of all, I believe truly in manicures. Yes, sometimes I like to overdress, and sometimes I like wearing lipstick. But at ALL times, I like to know my nails look decent. Which brings me to my recent manicure that I got done over at Fling Nails by Huiwen. Even though I wrote a previous post with Ashley HERE, I decided to do up another one because………… Fling Nails just got a makeover done and Huiwen also lined up some amazing promotions in store and I just had to share them with you – ESPECIALLY WITH OUR READERS IN WOODLANDS! 🙂 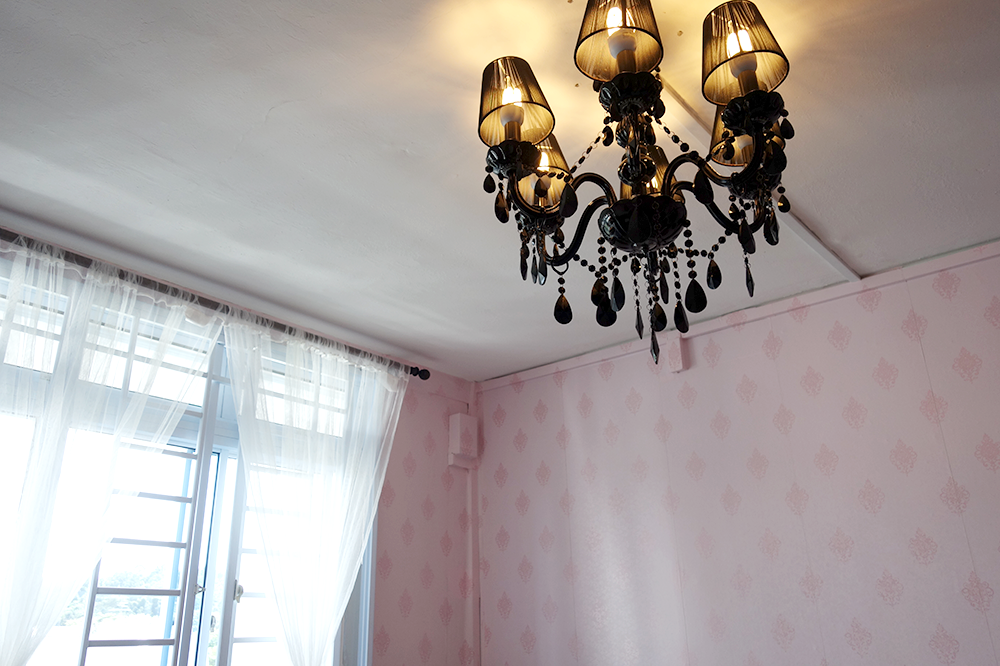 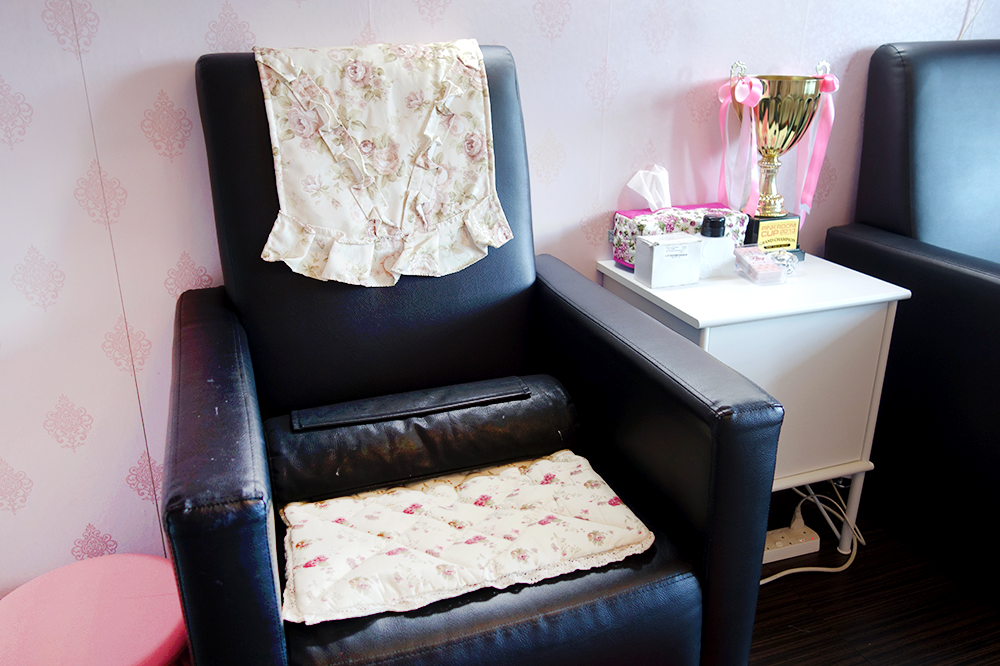 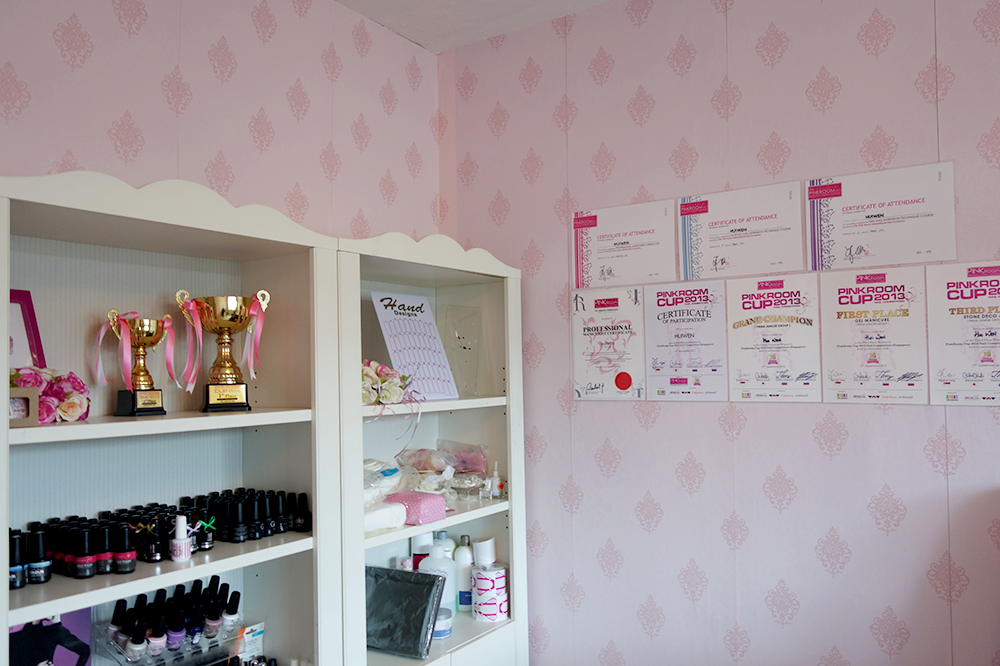 Talk about believing in pink – the walls have been done up with the prettiest wall paper and little touches here and there to the humble room such as the chandelier and lovely floral couch cushions have really made it look so homely and welcoming! When I stepped in, I was almost blown away. I loved how everything had been so well considered and the lighting was amazing for taking photos as well (hehe!).

Most of all, I would say what one can really appreciate is the fact that the room can only take up to a max of 2 customers, so you can bring a friend or simply go alone and feel entirely relaxed there. In fact, I even fell asleep halfway through my session because I was so tired, and it felt great to not get judged by any other customers who might’ve typically been around in a larger manicure store lol. I think at one point I even dozed with my mouth open! Haha, but really, Huiwen was so extremely accommodating to me that I felt entirely at home. 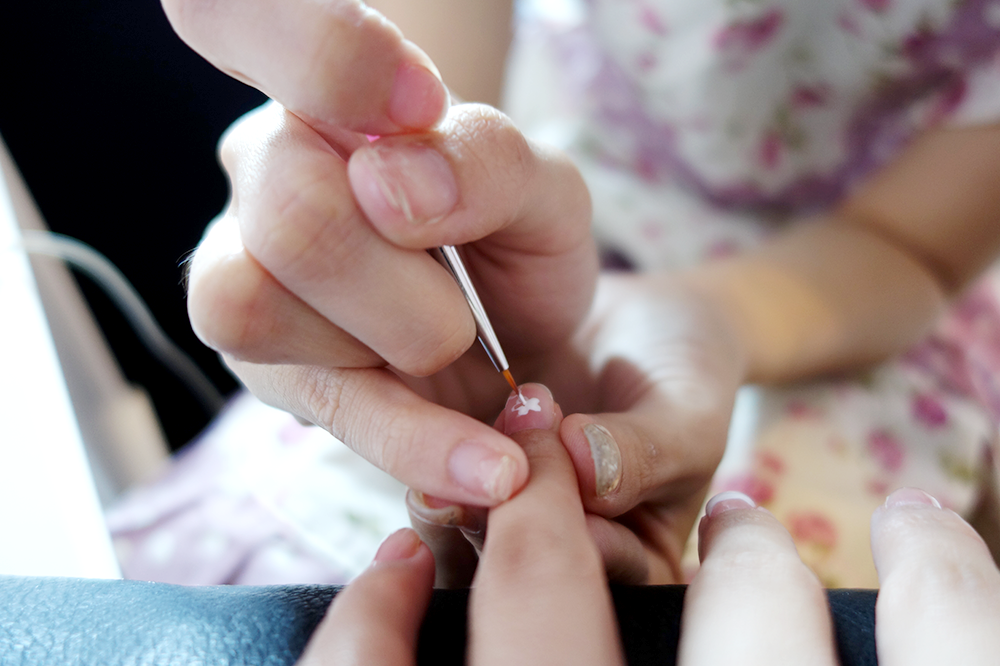 My manicure took about a total of 2 hours to 2.5 hours. If you’ve got one of those fancy designs which require nail art/painting, be prepared to STAY in that chair lol. It’s also good to get an idea of what you want before you head over because it’s just going to be a waste of your time and Huiwen’s if you just sit there and wonder for ages right?

Personally, I downloaded Pinterest on my iPhone and flipped through for a week or 2 before deciding on a few designs. I then ran these ideas past Huiwen, who is actually better at seeing if the nail designs would be too big/too small/too compressed on your nail bed size. I was sad that my nail bed was actually pretty tiny, which restricted me from a lot of designs, but I thought it was good that Huiwen actually gave me some advice before I followed through! 🙂 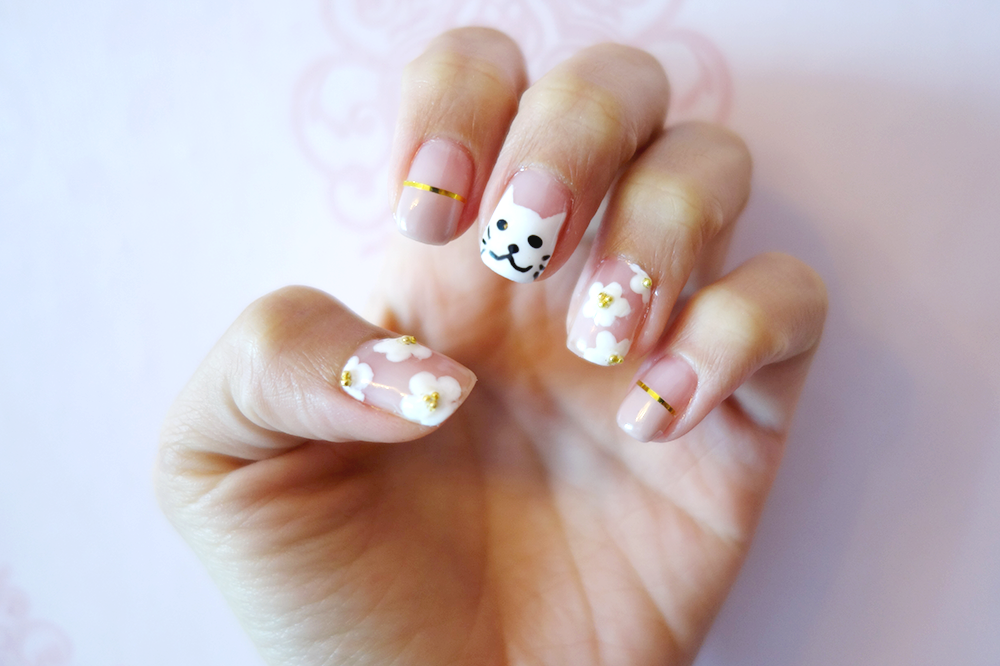 And here is a close up view of the finished product! Can I say… that….. I LOVE IT!!!! It’s a lot cuter than I’m normally used to and would normally do, but I just fell in love with the cat when I came across it on Pinterest lol. And I also really liked the idea of the Marc Jacobs-ish daisies… so Huiwen helped me put them together! The final touches of the beads on the flowers along with the French-ish Manicure + Gold strip were also thrown in during the brainstorming process and I must admit I’m so blown away! I actually cannot stop looking at my nails now like a crazy person lol. But in all honesty, I love her attention to detail and to what I want. I could not be happier!

So here’s the part all of you have been waiting for right!? Well, you won’t be disappointed! 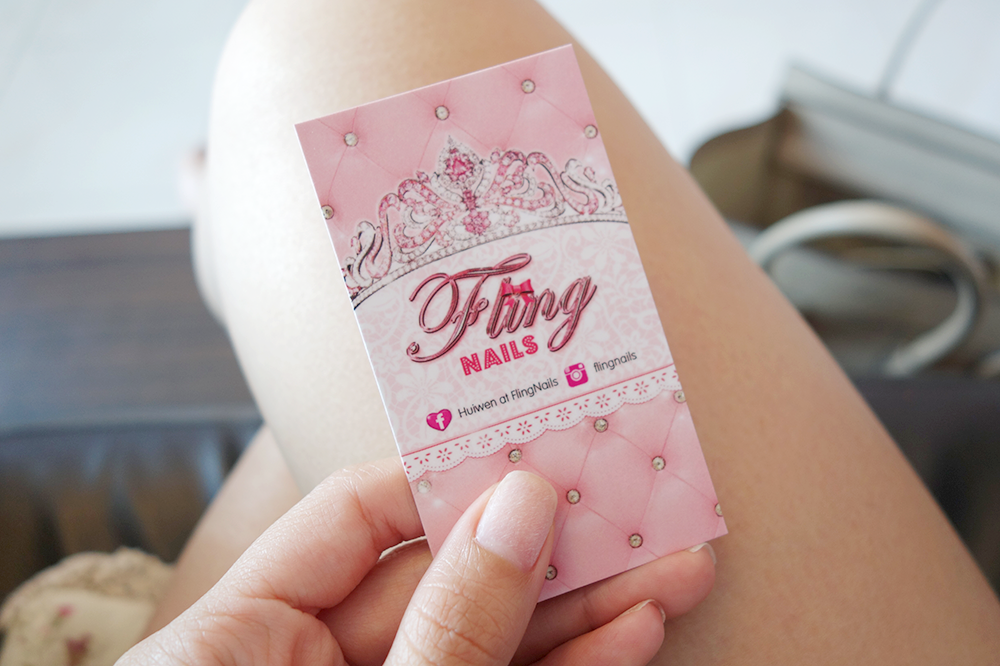 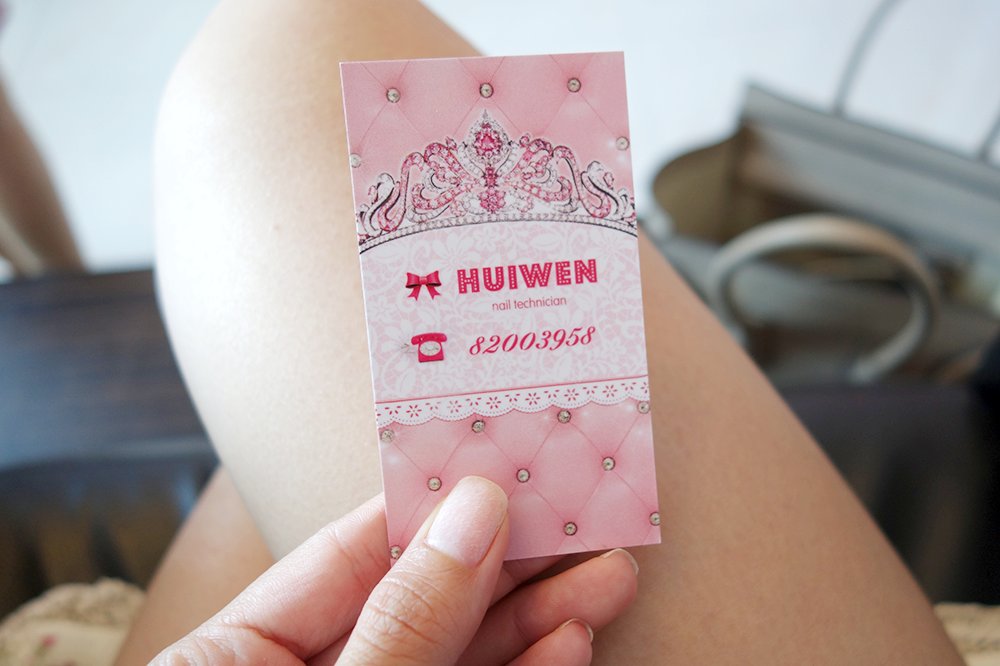 Just how crazy cheap are the prices right!? I mean, a Gel Mani at only $28 (which by the way is the full works and not just some random lousy express gelish!) is really an amazing price. I’ve paid up to $47 for an EXPRESS GELISH which I now am really kicking myself for!!!! -_-

So really, this CNY is the time to start booking because these prices are INSANE! If you did my design, let’s say, without the beads and just go with painting, that would cost only $55 NETT! I’ve had mine done at a ridiculously expensive place that I do not want to mention for over $60 when ALL I DID was Nail Art on 2 FINGERS!!!!!! Save your money, really, and do it at a better place and a better price like Fling Nails. You won’t regret it!

It’s pretty easy to get there, the only problem MIGHT be the hassle, especially for people who live as far as we do. But here are some steps to make it easier.

1) Get off at Woodlands MRT and take the escalator down to the Bus Interchange
2) Head to Berth 12 and wait for bus 912. I think you can take 912E as well.
3) Press the bell when you see The Woodgrove ahead, the bus stop’s right in front of it.
4) Head towards the traffic light to cross to Blk 335 opposite.
5) Take the lift further away from the crossing, because there are 2 going to different units.
6) Head up to her house (she will text you the unit number) and you’re there! 🙂

For people as non-geographically inclined as we are, we got there pretty quickly, so don’t worry!

Read More
BBeauty
Hi everyone, it’s Tuesday, which means… it’s almost midweek! And what comes with the midweek? Is it happiness…

Read More
BBeauty
The other day when I was out with Min (http://missrusty.net/), I joked with her that I should put…

Read More
BBeauty
About awhile ago, I decided that my facials weren’t quite cutting it for my chin acne situation. I…

Read More
BBeauty
Hi girlies, our post today is about something really major – we got chosen to be Luxola’s Bloggers…

Read More
BBeauty
Hi lovelies! Not only do skin care products play an important role in contributing to the outlook of…

Read More
BBeauty
I was going to write, “notice anything here?” and probably ask you, “want to zoom in on my…