5 Ways to Support Someone with Depression 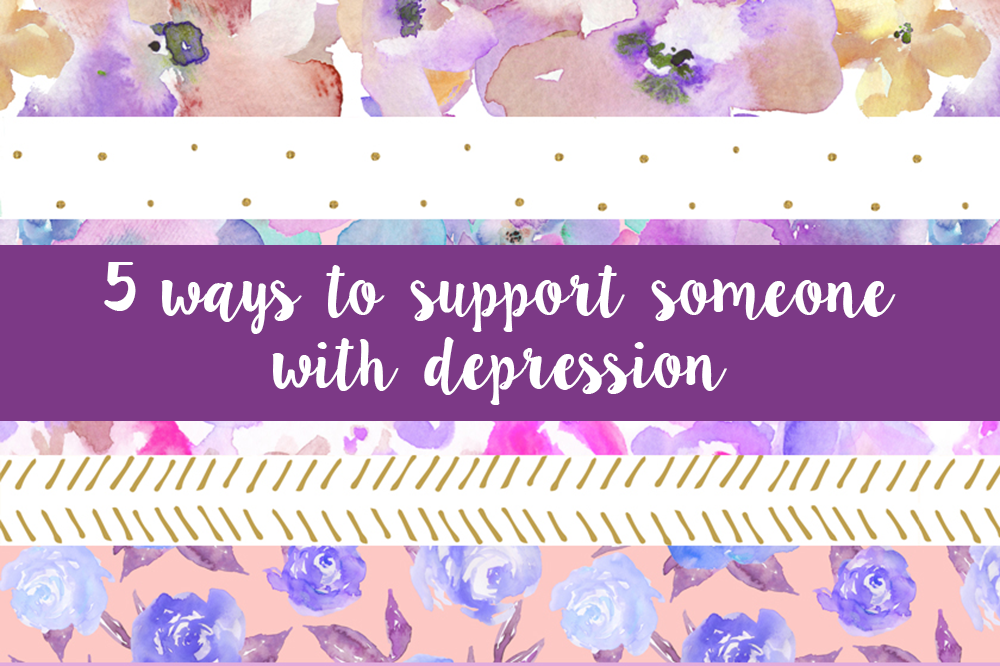 More and more people are starting to deal with depression in their lives, especially during times like these where workplaces are highly stress inducing and lots of social pressure is flying about. As a blogger, it’s easy for me to feel inadequate to many others who’ve made it big or basically doing much better in comparison. I believe many other people feel this way in their respective industries.

The thing is, it’s sometimes hard to know when someone is battling depression. People think it’s easy to spot on the outside – someone must be cracking, crying, or sulking surely? Well, actually that’s not true. People with depression can smile outside but are lonely and sad inside (read THIS if you’d like). So what can you do when someone you never expected to have depression, has it, and finally turns to you for support? Read on to find out.

HEADS UP: There’ll a few tons of F.R.I.E.N.D.S gifs through this post, some parts because I find them suiting and lightens the mood haha, but mostly because I just love the show…. by that I mean I love Chandler.

When I say ‘Listen’ I think a lot of people are telling themselves, “Gee, that’s simple!”

Erm no, it’s not. I did not disclose my depression to many people, but to those that I did… some actually liked to cut me halfway whilst I spoke and gave me their opinion on what could fix me/my issues. That’s not what I wanted at all. I wanted to talk, I wanted someone to listen.

The problem was that I FELT (because it’s not necessarily true) that no one could hear me, and those people who talked over me only exacerbated that negative feeling.

So really listen, let them speak. No matter how trivial their issue is (we all have stupid things that bug us right?) or how “easily solvable” their problem seems to be… let them speak. Hear them out, because one wrong thing you say could make the person clam up totally instead of opening up more.

I read THIS article lately on the association of rats and drugs and how the reader felt that LOVE was more than enough to cover the distance between the person with depression and the person who cares. Yes, to a certain extent love is needed to WANT to make the other person feel okay, but loving is sometimes not enough.

What these people feel sometimes is a disconnect more than lack of love. They could feel, yes my parents love me but they won’t understand me. This is what I personally felt, which is why my parents never even knew of that dark period.

So try to connect with the person going through depression, see what they’d like to do and maybe do it with them so they won’t feel so alone. I think the key is to make them realize you’re there for them but not in a sympathetic manner – they need to know you WANT to be there.

Personally, my cousins would check in on me through messages even when we normally didn’t text a lot. They would ask me out, distract me with other topics and what not. And during those times out, we never talked about my depression unless I brought it up on my end. They made me feel loved and cared for without actually reminding me of the issue. That was my “connect”.

I’m not saying you should do this ALL the time because naturally humans tend to take things (no matter how good they are) for granted if they always get their way. Once in awhile though, do something out of character or duty to make the depressed person feel cherished.

My very close friend, who is basically a workaholic actually took leave one day to spend the day with me doing absolutely rubbish things like lying around, eating and joking. I never expected that person to, despite me asking for it (I anticipated a no) but he did. He did not make me feel bad about it, he did not constantly check his phone for work updates and he didn’t message anyone else. He made sure I got the attention I needed and made me feel cherished.

To me, that was a wake up call to stop the self pity and sympathy because it was a SPARK of realizing, “Someone does care! I am not alone!”

You know the theme song for FRIENDS? Yeah, live it, haha. Be there for them.

I don’t mean it literally where your body is pasted against theirs, but be available. Yes, you might be busy sometimes and you have your own things to do, but setting aside a few moments to reply their SMS-es or calls will make them feel good too.

Some people I know who battle depression actually are in that battle due to a lack of attention from friends or family, so when they do get it they can feel guilty for bothering someone but also feel happy they are talked to and noticed. Their depression might take awhile to tide over, or it could be done with quickly; either way, if they know you’re unconditionally caring, that is still a form of solace.

Sometimes, what they actually need is therapy… There are different options like simple counselling/chatting to more serious medical counselling in hospitals/institutions. Of course, no one likes to be told they need therapy. People battling depression already feel lost, and being told they need “help” upfront makes them feel scared, intimidated, unwanted, or maybe all.

Perhaps you can always approach it in a more casual manner, see how open they are to talking to someone else besides you.

If the person in matter is strongly against it, don’t force them or insist it’s what they need. It’s like that movie ‘Inception’ – you’ve planted the seed so let it grow. People with depression generally DO tend to think a lot so you can be sure they will reflect on what you say especially if they really respect and like you. If the person does say yes, you can always introduce options like their parents, close relatives and trustworthy friends. If they say they’d prefer a third party, then you can always source out therapy places for them. Some good choices are:

If all else fails, don’t blame yourself. There are many types of depression. Some border on suicidal even and those closest to them may not be able to help at all. Don’t beat yourself up or give up. That won’t help you and it definitely won’t help the person you’re concerned about. Some depressed people tend to push others away or have their guards up so as to not get hurt, but this doesn’t mean they don’t deserve care all the same. Their barriers are there for a reason, so work with them through it.

I understand this article may not apply the same way to the whole spectrum of people who suffer from depression, but it is what helped me and it’s in light of what I myself went through. If it does work for you, I’m glad, but if it doesn’t or didn’t, share your experience with me! I’d love to understand more and help a little more. 🙂

BBeauty
I’ve always wondered who creates the famous Holt Renfrew window displays, where the ideas come from, and where…
BBeauty
Interview with Tanya Huang, the fierce femme behind Knot Theory - a line of modern handmade neckties and bow ties for both men and women.
BBeauty
Related

Read More
BBeauty
Greettinggs lovey faces! I had a phase last year where I was Crazy for lush products, I had…