Anniversary Trip to Phuket! (Part One) 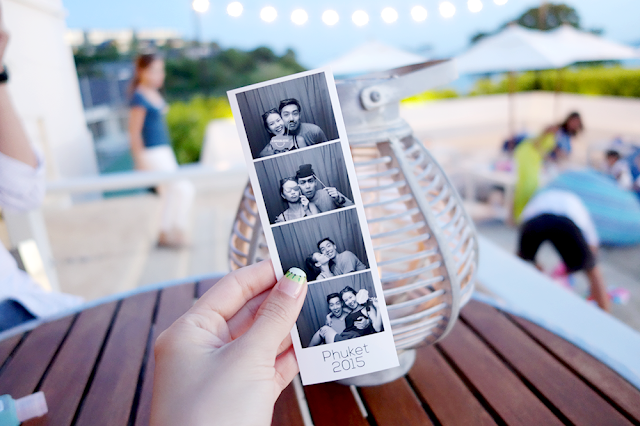 Sorry I’ve been on hiatus for so long, I’ve been facing some personal issues here and there and couldn’t find the motivation to blog.. but now that I’ve got some free time before I begin my full time job next week, I thought I’d throw in some snippets of my latest holiday! 🙂

I flew to Phuket with my boyfriend for our 5th Anniversary (time flies!!) and we stayed at Laguna, Allamanda Resort. It actually used to be a hotel but has now converted to Service Apartments. It’s apparently one of the cheapest around Laguna, which is sort of an expat area, and the apartment is really not bad. Mine was a 1-bedroom with kitchen, living room, toilet and dining area and I found it way more than enough for me and my boyfriend. 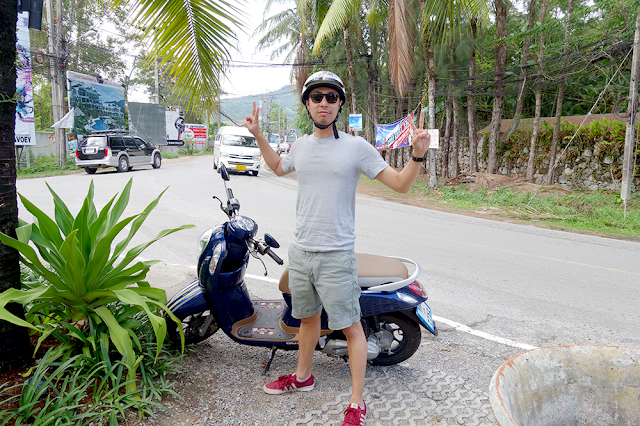 While it is rather near the airport, it can be far away from many popular places like Central Festival, Patong and Phuket Town! So if you or your friend/beloved could ride a motorbike, that would be great! We actually rented this for 300 Baht a day, approximately SGD $12, and went lots of places. Taxi rides were quite expensive at 500 Baht one way, which would have totaled 1000 Baht just to get to and fro so we decided one bike was enough. 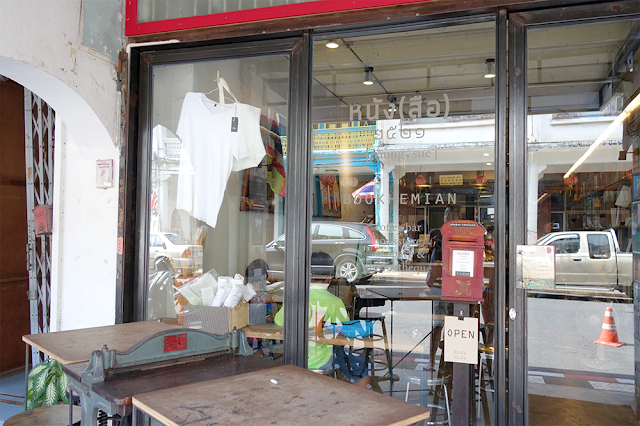 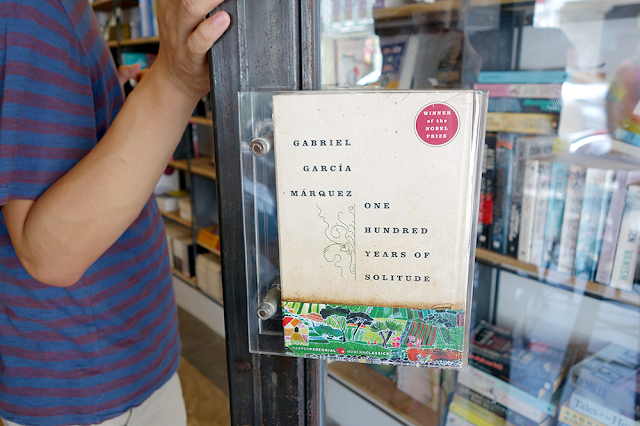 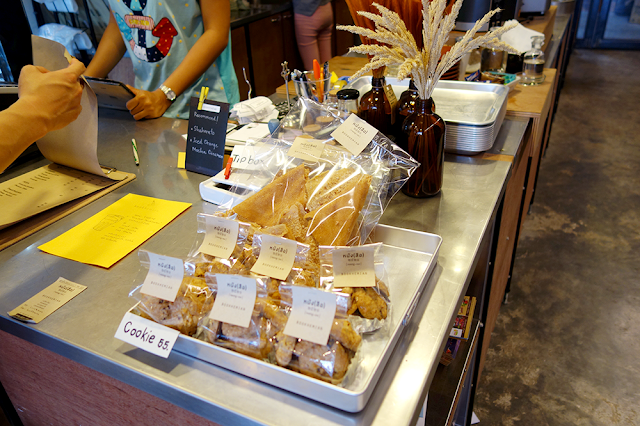 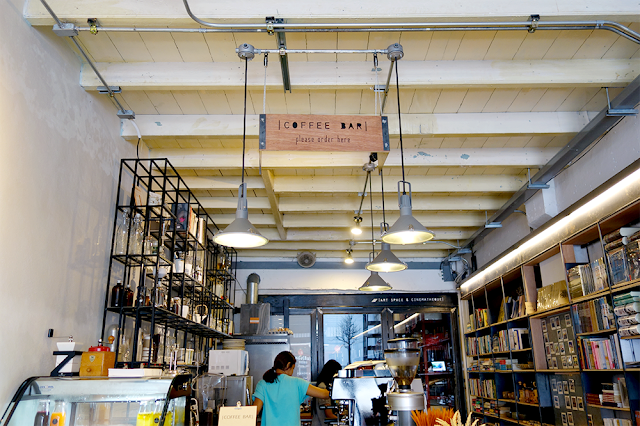 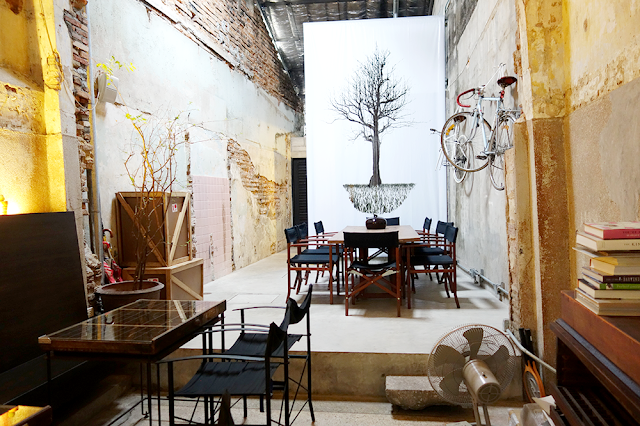 On our first day, we ventured into Phuket Town. Phuket was actually super hot during this time of year, even hotter than Singapore, and we were truly over whelmed by the heat wave. So with every chance we got, we hid in pretty cafes like this one above called Bookhemian.

While the drinks weren’t superb, it was really an interesting place! The back area would’ve been nicer to sit in, but it was open air and filled with heat so we sat indoors instead. Actually, besides the Thai Books around the corners, it would have easily fit into Singapore’s hipster cafe scene. 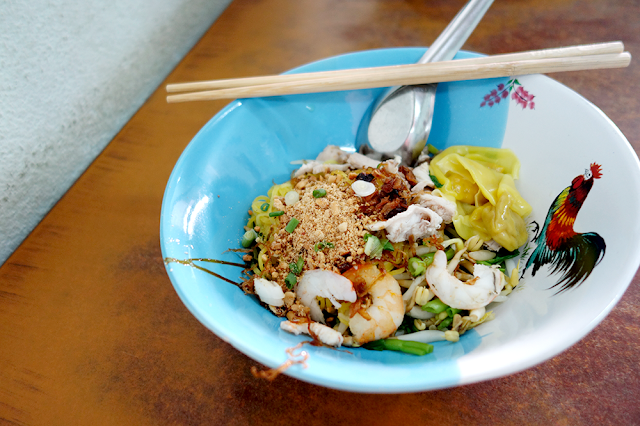 Shortly after this, my boyfriend got hungry and we started to hunt down “The Best Prawn Noodles” in Phuket Town. Apparently it was so good, I got dragged 1 hour around…. lol. Turned out, the soup is really delicious but the noodles and ingredients…. not so much. Still, for 60 Baht we couldn’t complain much; plus the picture turned out so pretty lol! But seriously, nothing to run around hunting for.

If you’re still wondering where it is though, it’s located near a roundabout in Phuket Town. It’s pretty easy to notice since LOTS of people seem to be eating there and they only serve this one dish either dry or soup. 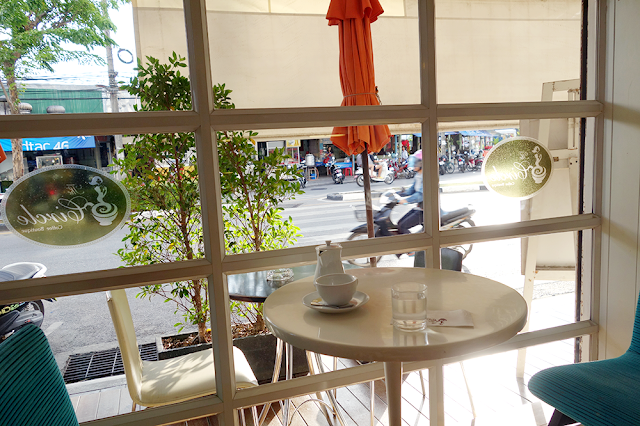 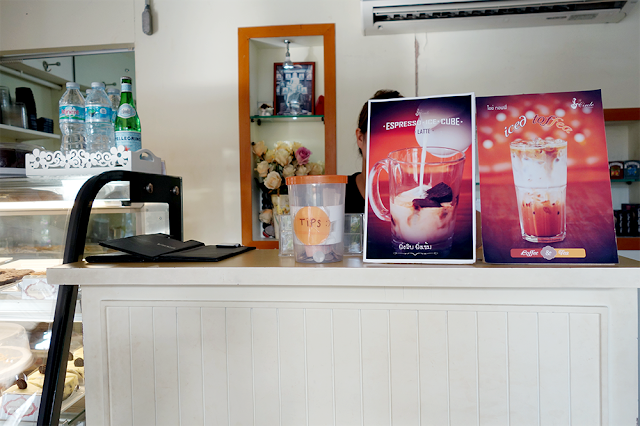 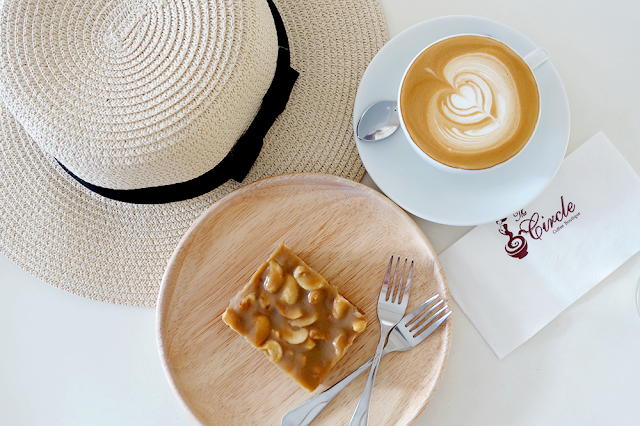 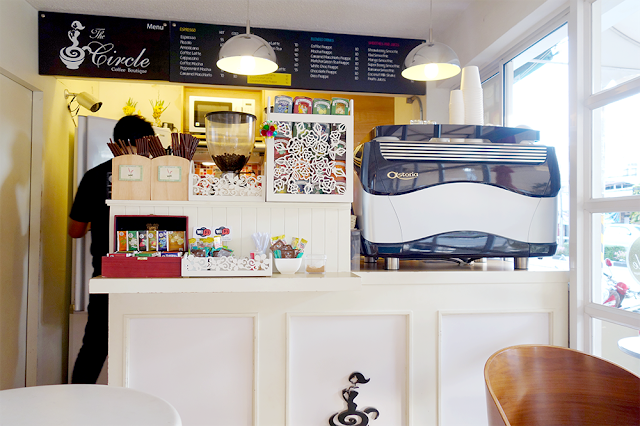 The second cafe we ran off to to escape the heat was The Circle Cafe. Yes, this was all in ONE day. I felt like having dessert so my boyfriend and I shared a Toffee Cake. It’s probably THE BEST coffee cake in existence because I don’t have a sweet tooth and I dislike cakes in general….. but I finished this one hahaha. The people in the cafe were really lovely though: we hadn’t gotten our motorbike on the first day and had a lot of trouble hunting down a cab, but the staff offered to call one for us! 🙂 Thai Hospitality, huh? 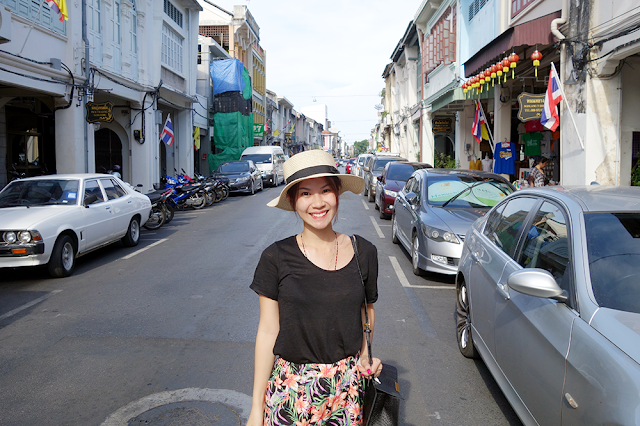 As mentioned, the heat was burning BURNING down, so I suggest bringing a hat if you’re planning on heading over to Phuket. I got mine for 199 Baht and thanked God for it because it saved me for many days after! 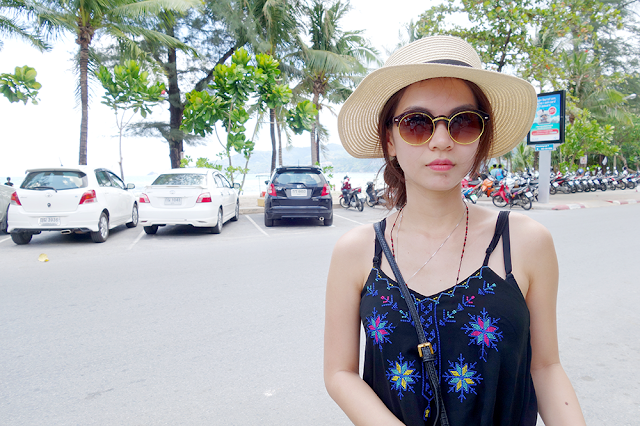 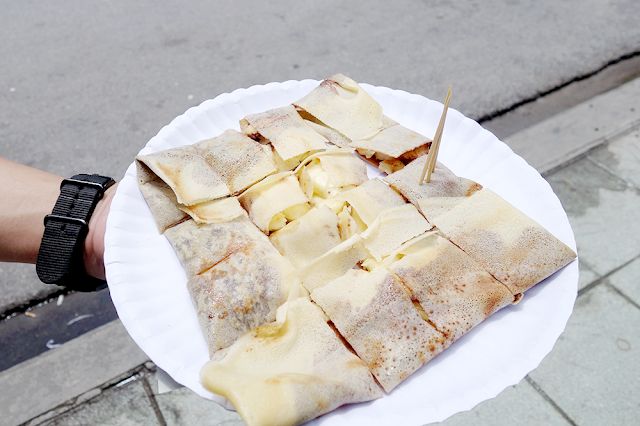 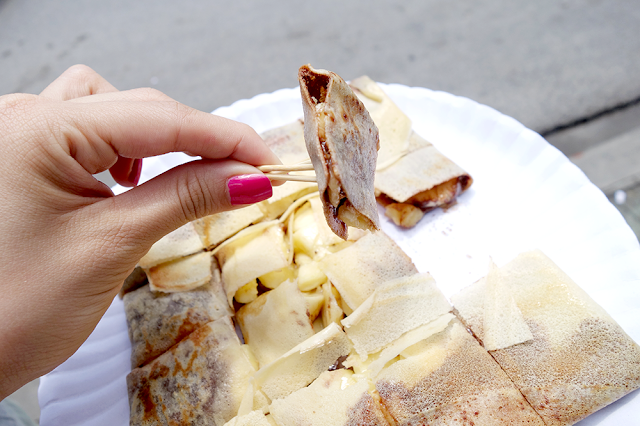 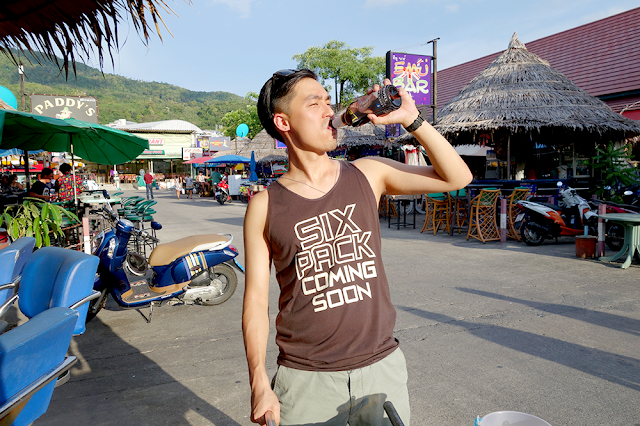 My boyfriend and I headed to Patong the second day! I didn’t take a lot of pictures because I was… shopping and eating lol. Though to be very honest, the fashion there is actually pretty much the same as 10 years ago…. If you’d like an example, Megan Fox t-shirts are still being sold. Remember those where she’s kind of half naked eating a cherry? Yeah those. I ended up buying a dress which I thought would be ADORABLE for my baby niece, only to open it and have my mum say she bought the exact same one for her friend’s daughter 10 years ago…………….

And if you’re thinking to go down to buy really cheap clothes, don’t. The clothes aren’t very wallet-friendly anyway and they’re all pretty outdated. I did end up buying Wacoal bras though, 3 for SGD $60, which I’ve heard is very cheap! So head to the malls instead and stock up on ’em bras.

There technically isn’t a lot of good/cheap food, besides the Banana Nutella pancakes shown above, because Patong is helluva touristy, so you can expect to spend quite a bit there but not quite the same value or quality back. My boyfriend also mentioned that sometimes, drug dealers come up to you in broad daylight on the street and try to sell you “Ice”. URK. URGH. So yeah, Patong isn’t that great. 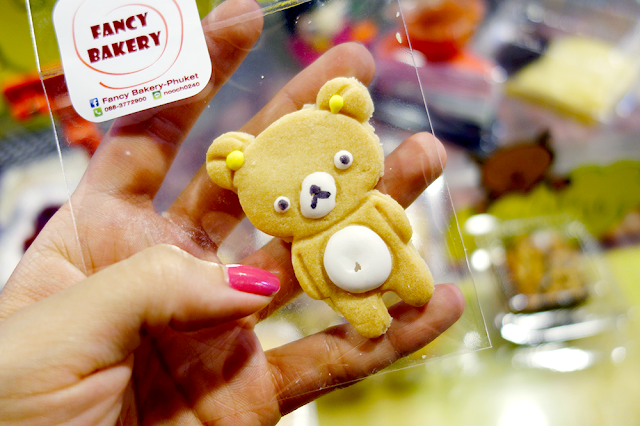 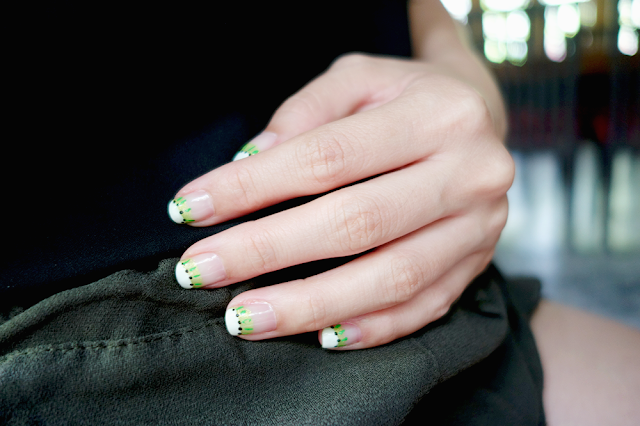 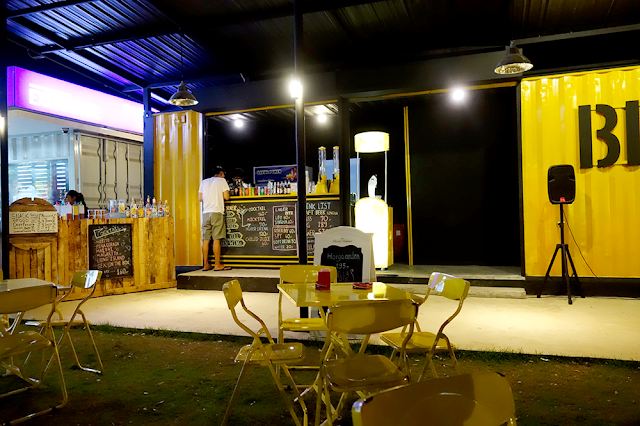 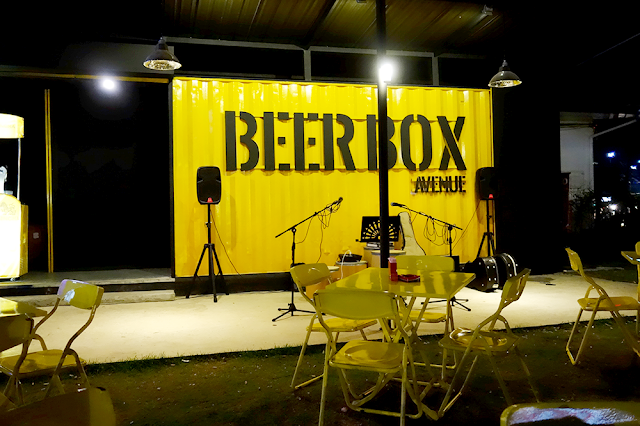 My two favorite places in the whole trip was Boat Avenue and the Wet Market located nearby it. I’ll start with Boat Avenue though.

Boat Avenue is above all, an area for expatriates actually. There are higher end Italian, Japanese, Mexican eateries and a supermarket equivalent to Jason’s back home. It’s pretty boring in the daytime, especially on weekdays because there isn’t much to do at all. However, it totally changes on weekend nights!

On weekend nights, it’s home to a Phuket Flea Market with tons of great and cheap street food (way cheaper than Patong!) and tons of knick knacks and fun things to do. You can try out Henna tattoos, get childrens toys, eat coconut ice cream, drink beers on the grass, shop for clothes, etc! There’s just SO MANY things for sale – like my cute bear cookie! My boyfriend and I loved it so much we went back two nights in a row. I even got my “kiwi” nails done for only 250 Baht, which is converted to about SGD $10 for GELISH. Woots! 🙂

My boyfriend LOVED Beer Box, which is a bar in a container, because the atmosphere was super chill. The nights are windier, and it’s great to sit down and relax there since it isn’t crowded and full of “party people”: just laidback folks who want a beer and quiet conversation. They serve up really fresh Singha Draft Beer and pretty scrumptious appetizers as well. Check out their Facebook page HERE. The boss took this photo of us above, and printed one out for us to keep! We were super touched. 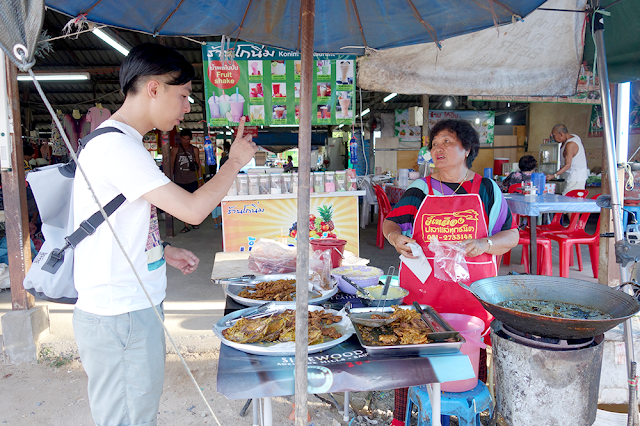 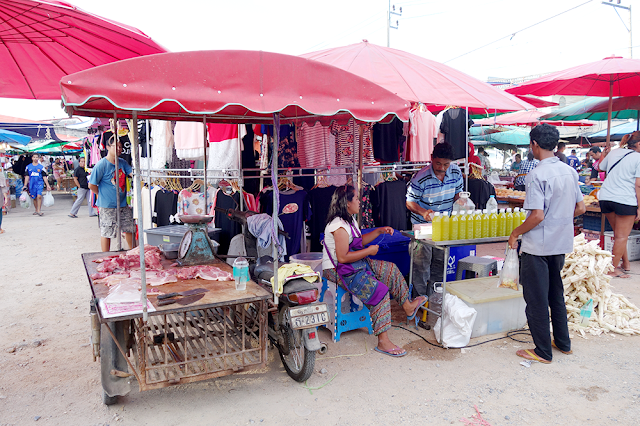 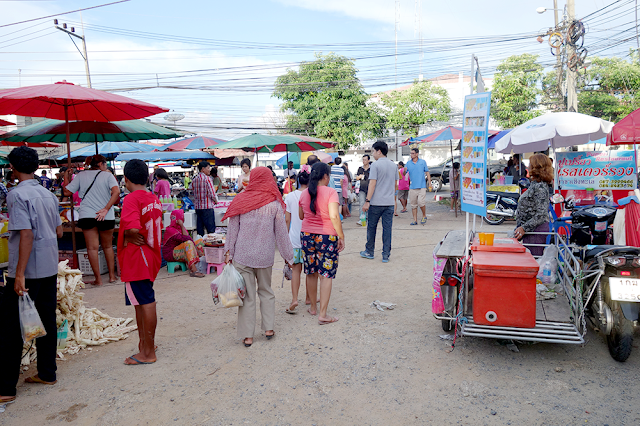 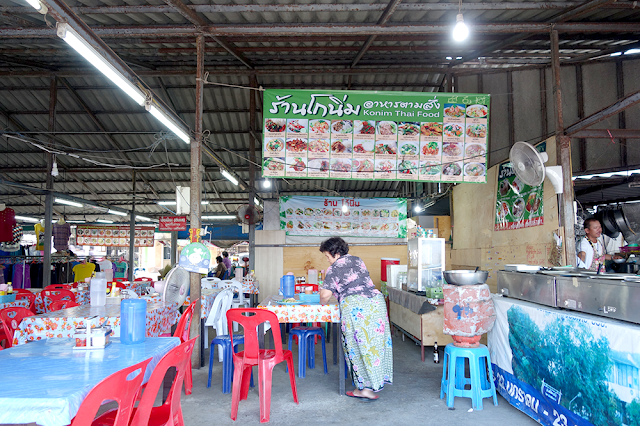 I was surprised to see their wet market was really much like ours, besides the ground being sandy. Their stalls resemble our Pasar Malam ones, and they sell a HUGE variety of things. There’s fried soft shell crabs, potatoes, fish, salads – name it and you have it. They also have their famous Thai Ice Tea and desserts.

My boyfriend and I wandered into the coffeeshop above to have our early dinner which consisted of Basil Mince Pork Rice and Tom Yam Goong. It was DIVINE. We literally didn’t speak to each other for a good 10 minutes because we were gobbling our food up. Every bite was flavorful and my boyfriend swears his Tom Yam Goong was hands down the best he ever had. I didn’t take any photos, sadly, as I was famished and chose to eat non-stop instead lol.

Good news is that everything was cheap and worth every penny. Bad news is that we both visited the restroom quite a few times later that day….. and the next ahahaha. Not tummy aches or bad food poisoning per se.. just uncomfortable bellies. If you feel you’ve got an iron stomach though, please feel free to try this place out! Otherwise, get some charcoal pills ready. 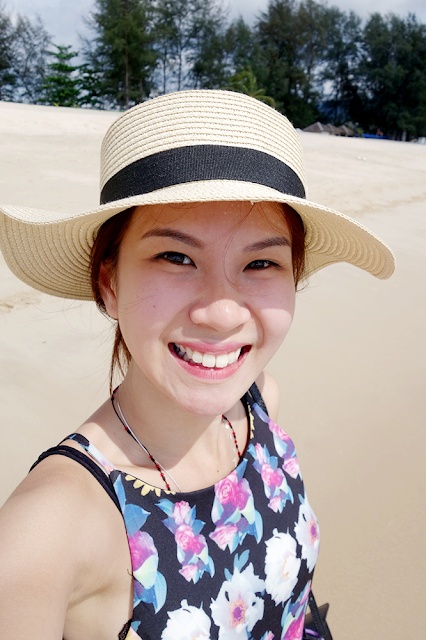 That’s the end of Part 1! Hope it wasn’t too long or draggy! I should be getting up Part 2 by next week, which will be about my anniversary day and some of our amazing beach side meals 🙂

Since theres not many pictures of me in this post, I hope this one suffices! I’m not wearing any makeup at all, just IDS non-tinted sunblock – my lips and eyebrows are embroidered so woohoo, traveling has really been made easy! I’m very excited to own this website by myself now, and I hope you guys will enjoy more lifestyle posts soon! xx

Read More
BBeauty
Hi lovelies, We’re through with school! So that means we’re back on track with our blog posts as…

Read More
BBeauty
My latest thrift store score. Fashion doesn't need to be expensive; I found these black boots for $5 and they are perfect for fall.

Read More
BBeauty
Greetings fellow readers! Facial Cleansing tools: are they compulsory to have within your skincare regimen? I’ve pondered upon…